Akira Toriyama Oct 14, 2021 Akira Toriyama
Goku’s adventure from the best-selling classic manga Dragon Ball continues in this new series written by Akira Toriyama himself!Ever since Goku became Earth’s greatest hero and gathered the seven Dragon Balls to defeat the evil Boo, his life on Earth has grown a little dull. But new threats loom overhead, and Goku and his friends will have to defend the planet once again in this continuation of Akira Toriyama’s best-selling series, Dragon Ball!The Tournament of Power is over and Goku and Vegeta have embarked on a new adventure...in space! The Galactic Patrol experiences its worst prison break ever, and the evil Moro―a planet-eating monster―escapes! Moro’s goal is attaining the Dragon Balls of New Namek, and it’s up to Goku, Vegeta and the Galactic Patrol to stop him! But what can they do when Moro can drain them of their energy just by being near them? 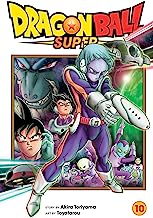